This blog post is about bugs. About bug-tracking software. About prioritising what issues to fix first. About client-developer communication. About Service Level Agreements. And about hotfixes.

If that didn't scare you away, well hello there!

Clarabrige Engage is software that allows companies to respond to their incoming social data (Twitter mentions, Facebook wall posts, etc.) as fast and as efficiently as possible. The customer care agents of companies like Telenet, De Lijn, NMBS (in Belgium), and Lufthansa, Turkish Airlines, T-Mobile (worldwide) use Clarabrige Engage day-in day-out. They've set-up highly customized workflows within our tool, including automated actions, advanced filtering and real-time communication.
This makes Clarabrige Engage a business-critical tool for our clients to serve their customers. To help with set-up, or if clients have discovered a bug in our system, there is direct in-app access to a live chat that puts them in contact with one of our support agents.
These support agents handle several chats and incoming emails per hour. We use Olark for in-app live chat, and use Salesforce Desk as the tool to handle incoming emails. 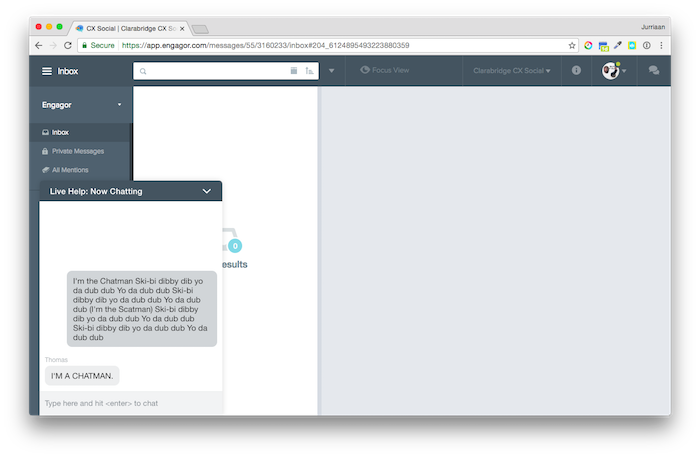 The support agents are the people in our company that know our tool best. In several cases even better than us developers who wrote the code for it. We involve our support agents in testing new features we build. By making support part of the Q&A-process, we assure they have used new features before clients put their hands on it, but also that the product team keeps solving real problems that our clients are having every day.
Apart from that, we actively maintain FAQ documents that help support agents identify problems, and collect the correct information to reproduce issues. We - try to - regularly organise trainings that go deep into certain aspects of our application. The customer support agents for Clarabrige Engage know the basics of html, can interpret some - if not most - of our monitoring dashboards and know about oAuth or API's and find their way around the Chrome Developer Tools.
All with one goal: to be able to solve our clients' problems as fast as possible. (Read: With as little help from a developer as possible 😏 )

A Direct Line To Development

For those cases where the help of a developer is wanted, our support team has a direct line open to development, and that's the internal Slack channel #supdev that all support agents have joined. The main goal of this channel is to discuss whether a certain symptom is in fact an issue. We've seen it work best if all these discussions happen through a single and public channel so that multiple people can jump in to help. This encourages learning from each other's questions and answers, and also helps to hand-over problems to teams in other timezones. On the other hand, on active days, the constant flow of messages in the #supdev channel often get in the way of focus. That's why the people in our development team are taking turns in answering support questions in this channel, and by doing that allowing others to preserve their focus. The whole development team (all full stack developers) takes part in this schedule we nicknamed the 'chatman', in periods of one week.

The result of this direct line is;

We use GitHub Issues as our main bug tracker. Not that it matters that much, but here's some of the reasons we appreciate GitHub:

We have set-up an issue template to guide our support agents to provide as much of the relevant context as possible. This issue template makes sure we always know the User ID and Account ID of the person having/reporting the problem.

We have several types of issues; "critical", "minor" and "major", which we indicate with issue labels. Most issues are classified as "minor", and the "major"/"critical" labels are reserved for those "drop everything and fix this"-type of problems.

Whenever a Desk case (= client report) results in a GitHub issue (= actual bugreport), we make sure to save the connection between the Desk case and GitHub issue in our own database. (The why is explained later.)

In a typical week at Clarabrige Engage around 10 bugs are reported, and while most of them take about 2 to 3 hours to fix, some take days.

Batman Will Fix It

Similar to how we have a dedicated person answering questions from our support team, the person(s) responsible for fixing bugs is also a rotated role. Each week different people are assigned the Batman role, and spend their week digging into the reported and confirmed issues, trying to find a solution for them.

This separation of bug fixing work from standard product development (i.e. new features, or reworked features) has the following advantages for us: 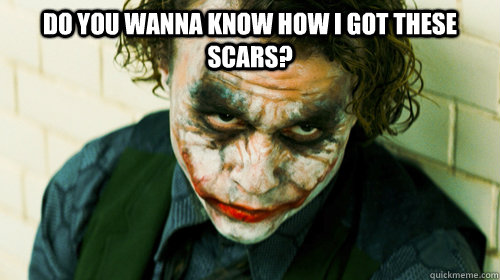 At the same time, a system like this creates a few problems as well:

The solution for this is simple: allow to deviate from the guidelines. In emergency situations, more people are working on bugs than just the Batman. And if you are close to a fix on Friday evening and fixing it will only take another half a day; of course that's what we do. And have regular in-person #supdev-meetings with the support team, and this and next week's Batman and Chatman.
The agenda for these meetings is:

We use this system in a tech team of 11 people, of which 7 people are involved in this Batman/Chatman schedule. The rest of the team is either designer, data scientist or ops people. While it works for us now, we realise it might become hard if the team grows.

On top of the GitHub API we built several dashboards that plot the trend in amount of open bugs and that show our average resolution time. These are the prime indicators we take into account when planning extra resources for this role. Our Slack bot will also notify us when issues stay open for too long, or are unassigned, or miss labels, etc.

When an issue is closed but without a resolution (it's a duplicate, we were unable to reproduce it, it's a limitation of the external services we use, etc.) we indicate this with a resolution label. And similarly we tag all bugs with a label indicating which Clarabrige Engage feature group it's related to. These two types of labels help us assess the quality of both our bug reports as identify problem areas with the application.

The nature of a bug typically entails its priority; if something is a problem with a core feature of Clarabrige Engage, for multiple accounts at once, it's labeled as "major", and thus has higher priority over bugs classified as "minor". Luckily, the amount of "major" bugs is limited. So, most of the time we spent fixing "minor" bugs. Typically we have between 10 and 30 of these bugs open, and from this to-do list for the Batman it's important we focus on those issues that have the most impact, for whatever reason. It's our support team that decides which of these to work on, since they know a bug's impact on customers best. 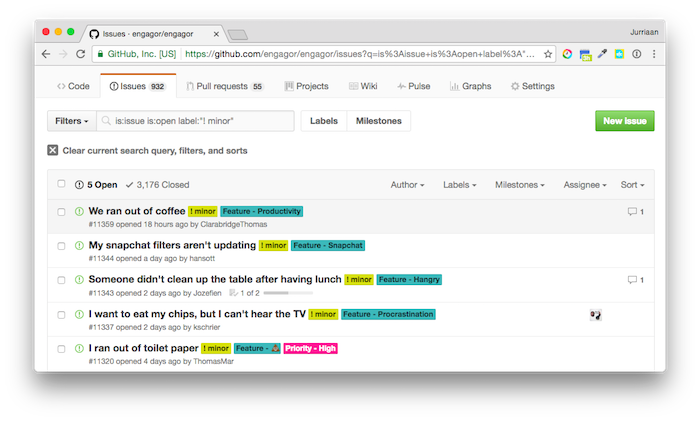 We didn't always work this way. Over the course of the last 5 years, we've had a whole bunch of different approaches.

In our first iterations Batman also did the duties of who we now refer to as Chatman. But complex bugs often require a lot of focus (and we found out: more so than for standard product development work), so this combined role, resulted in a lower bug closing efficiency. And that's of course the main target for a system like this.

Not having a Chatman at all, is even worse. The fact that a developer can add his/her perspective to a bug report, greatly enriches the quality of a bug report. The fact that this communication with the Chatman happens over chat, avoids a slow ping-pong of "needs more information" comments on GitHub issues.

While it's sometimes tempting to skip a weekly #supdev-meetings, we've found that not having a regular in-person meeting between development and support creates an invisible "hostility" where it feels like one party is fighting against the other: fixing bugs versus reporting bugs. While what really happens is two teams working together to fix customer issues. Talking in person can cause breakthroughs because ideas get validated or ping-ponged.

Deploying Fixes & Reaching Out to the Customer

When a developer has fixed a bug, it's pushed to a separate branch which is then opened up for peer review via GitHub's Pull Requests and the Support Agents involved in the bug report are notified. At this moment it's also possible to fire up a staging environment with the bug fix to verify by support.

Approved bug fixes are typically pushed out to production the same day. And by requiring issues to be closed via GitHub's closes #issueno commits, our continuous integration agent Jenkins also knows what fixes he is deploying to production. We have configured Jenkins so that it leaves a comment on the actual GitHub issue with the build number and exact time of when a fix for that issue went live. Jenkins will also make sure to post any bug fixes that are deployed to a few of the relevant Slack channels. 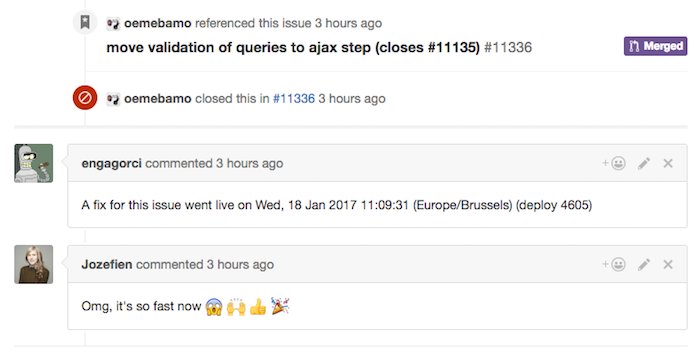 This Jenkins-comment on the GitHub issue will also trigger the reopening of any Desk cases associated with the GitHub issue, so that our support team immediately has the relevant cases reopened. By closing the loop back to the customer we make sure that customer immediately knows about a fix, and that we have confirmation of the fix as soon as possible.

What strategies have worked for you to speed up the bug fixing process and ensure positive communication between those encountering the bugs, reporting the bugs and fixing the bugs? 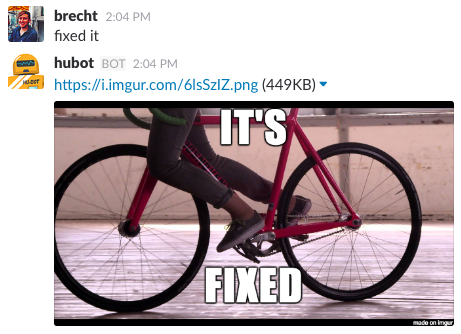